Amanda Wilkins ’08 decided she wanted to be a nurse at the age of two, said her mother. That’s when her younger sister and best friend, Cara, was born. Amanda’s favorite piece of dress-up clothing was a pair of toddler-sized scrubs purchased by her father at the hospital gift shop to commemorate the occasion. The eldest of four born in Calvert County, Maryland, Amanda would go on to play the role of “second mom” with her three siblings, the youngest of whom was born when Amanda was 18 years old.

“Amanda was a born empath,” said her mother, Rona Hays. “She just cared about people and was very compassionate, very giving. She was a helper.”

Amanda maintained her interest in nursing throughout her childhood and formative years, enrolling in her high school career center’s nursing program, from which she graduated as a certified nursing assistant. She went on to join the nursing program at Shepherd University and began her career at Holy Cross Hospital in Maryland working in obstetrics. While she loved delivering babies, Amanda wished to diversify her expertise and ultimately worked in several fields of nursing, including gastrointestinal care, post-surgical care, and women’s care.

“Nursing was her passion and her drive,” said Rona.

Amanda was diagnosed with breast cancer in 2018 at the age of 32. While she initially triumphed over the disease following her first round of treatment, she experienced a setback several months later and passed away in June 2019 at the age of 33.

In the weeks leading up to her passing, while confined to a hospital bed, Amanda wished to speak to her young daughter about cancer in a way the child would be able to understand and process. She requested a book from the hospital library that might help with this difficult task only to learn the facility lacked such resources. Following some research of her own, Amanda selected three books that were written to help cancer-stricken parents explain the disease to their children: Cancer Hates Kisses, Nowhere Hair, and The Goodbye Cancer Garden.

Amanda reached out to friends, family, and followers through a blog she maintained to share her cancer journey with a request that her readers consider purchasing one or more of these books for donation to the Anne Arundel Medical Center DeCasaris Cancer Institute and other hospitals throughout the United States. This request resulted in over 300 books being purchased and distributed to hospitals throughout the nation. Each book contained Amanda’s story and an appeal to the recipient to pay it forward with a donation of their own.

“Because of Amanda, we’ve started this awesome book donation program for hospitals and other parents just like her, for whom these books might be a resource and a comfort in their time of need,” said Rona.

After her daughter’s passing, Rona admits she immersed herself in grief until she realized it was not what Amanda would have wanted. She decided then to devote herself to honoring her daughter’s memory by helping others the way Amanda had always done. Rona organized a raffle in Amanda’s name and raised over $12,000, which she used to bring awareness to Amanda’s story and maintain her legacy. In addition to purchasing additional books for donation, Rona and her family chose to create two scholarship awards in Amanda’s name: one at the Career and Technology Academy through Calvert High School where Amanda began her nursing career and the other at her alma mater where she received her training.

The Amanda Wilkins Scholarship at Shepherd University is a one-time award for the 2021-2022 academic year designated in support of three nursing majors who show the same drive, determination, and compassion that Amanda did. One of the three awards is designated for a nursing student who is also a member of the Delta Zeta sorority, of which Amanda was a member. The Amanda Wilkins Scholarship has been awarded to rising senior Seval Okulmus and rising juniors Brianna Sine and Michaela Henke.

The family of Amanda Wilkins continues to encourage contributions in her memory toward the purchase of books for distribution to cancer institutes and other medical facilities throughout the United States.

“By creating these scholarships and donating these books, the one thing we ask is that the recipients tell Amanda’s story,” said Rona. “If they can impact even one person, then it’s a waterfall effect. That’s what Amanda would have wanted.”

More information may be found at the legacy website https://amandashaywilkins.com. 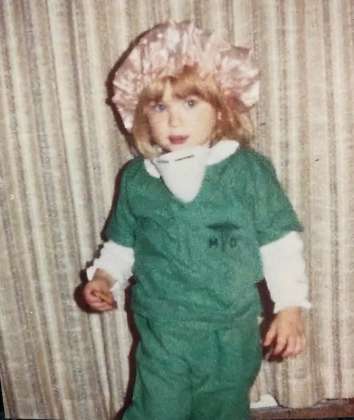